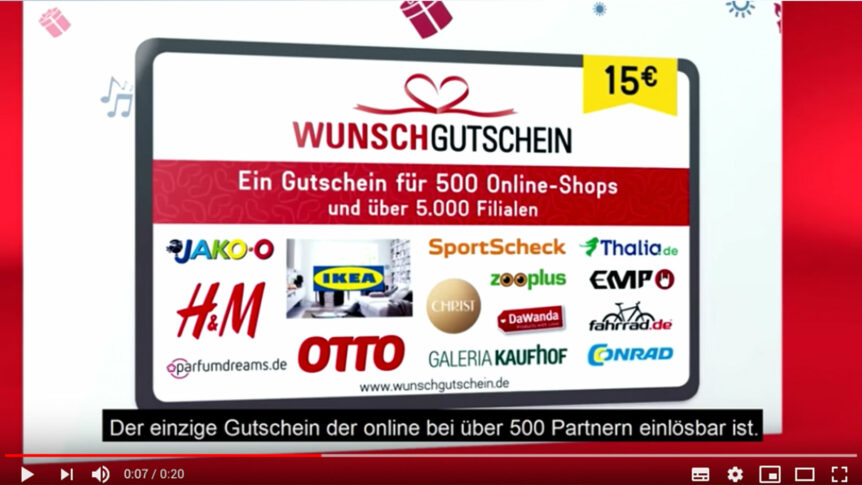 The company exceeds 100 Million Euro in Sales in 2020. The companies growth is expected to speed up even more during the Christmas shopping season. The company is now launching the latest flight of one of the largest ad campaigns in the gift card segment on digital channels and national radio stations.

These video and audio spots will be shown at the best broadcast times throughout the day and during prime time, shared between ATL and DIGITAL channels. The campaign will run from mid-November 2019 until the end of December. A total of 126 million contacts will be reached, statistically every German citizen 1.5 times within one month – the target group will reach up to 8 contacts within that timeframe. The adverts are intended to promote the sales of the voucher online and in shops and further establish the “ WISHCARD“ brand as the standard for gift vouchers.

Tom Schröder, CEO of Digital Wishes GmbH, says: „We’ve experienced phenomenal growth so far this year, and we expect the Christmas shopping season to blow all the records out of the water. The campaign we launched today is a huge step for us of course, but we’re sure that this is the best way to position our brand with a very broad group of customers. Which, in any event, is something we could not be better prepared for thanks to the solid investments we’ve made in infrastructure and production. Production at maximum capacity is currently running round the clock, with three shifts producing up to 100,000 vouchers per day.“

The twenty-second TV spot will be shown frequently, with a clear focus on the company’s central message: „The WISHCARD is the perfect gift for everybody.“

As universal as the WISHCARD is, redeemable with over 500 partner companies, a special feature makes it quite individual as well. Every WISHCARD  includes a greeting card, allowing donors to send a their own personal messages. Wunschgutschein TV Spot